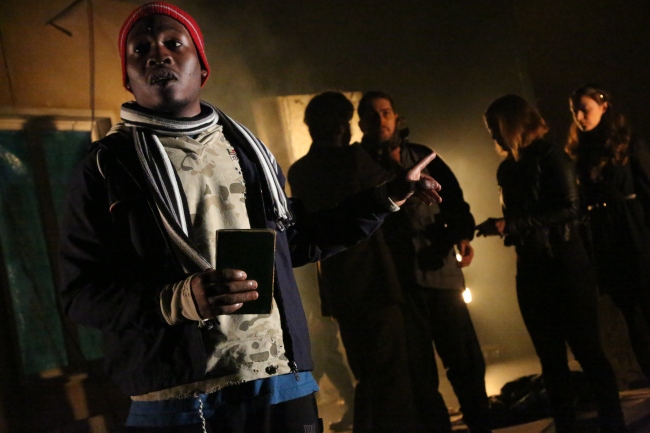 Douglas Rintoul is the Director of Transport Theatre’s ’As You Like It’, at the Albany, Deptford, from Tue 19 – Fri 22 Nov, 7.30pm  (Thu mat 1.30pm). In this interview he talks about his inspiration for the show, the process of adaptation, and what the Bard would have thought about it.

Find out more about the show and book tickets here

Can you tell us about your vision for this version of As You Like It?

A few years back I joined the No Borders Camp in Calais, France. Its aim was to highlight the grim daily reality for migrants there and to protest against their increased repression. Meeting migrants (many of whom had traveled for over five or six months, fleeing their homelands and facing extraordinary dangers) I was struck by their joy, optimism and thirst for life, plus their sense of community and family. A few months later I re-read As You Like It and in the forest of Arden the characters’ desires and needs chimed with those I had encountered in Calais.

Elsewhere I had read about female refugees who disguised themselves as men when they fled their homelands because it was safer for them to travel as men. I also read about a migrant who learnt English by reading Shakespeare. These coincidences/connections meant that Shakespeare’s comedy became the perfect magnifying glass by which we could highlight certain contemporary experiences.

How do you want audiences to feel after the show?

As with all our work we want audiences to be moved, transported (and more profoundly) changed in some small way. We always ask ourselves: ‘How do we want our audiences to be different by the time they leave the theatre?’ We want audiences to feel as if the have got as close to Shakespeare’s play as possible and I would also like to think that having seen the show the next time an audience member sees a negative headline in the newspaper about migrants or refugees they may think slightly differently. We’re really abusing Shakespeare’s play to achieve this. It’s a sort of slight of hand.

What new perspectives on Shakespeare and society do you hope to offer with this production?

I’m interested in enabling audiences to experience Shakespeare’s work as something living, something that relates to our own experience of the world. I’m interested in them experiencing the play as universal, not exclusively English – belonging to many. Our company for this production is international and ethnically diverse: it is English, British, British Asian, British Turkish, Polish, Georgian, Icelandic, Luxembourgish and Danish. I want our stage to reflect the world we live in. It also allows the text to open up and be many things to many people.

As You Like It is a comedy, how do you envisage this working with the more serious themes you take on – how bring these different elements together?

As You Like It is a comedy but much of the first half of the play happens within the context of a dictatorship. People are literally struggling to survive. Once they have achieved this (having fled) and arrived in a new world, these tensions vomit out in the most extraordinary ways – in poetry, love play, sexuality and philosophy. The light can only seem bright having been in the dark – this is inherent in the play, this is what the play is about. It is a peculiar play but if we look at it as a piece of music, somehow it works – in the way complex music can work. It shifts from deep lows to chaotic highs, and this journey is exhilarating.

Of the entire Shakespeare canon, why did you choose As You Like It?

Its exploration of exile, shifting notions of identity and sense of self chimes with enquiries we have engaged in throughout our recent productions Elegy, Invisible, Europe and 1001 Nights. It presented itself as a new way of exploring these themes whilst at the same time enabling us to present them as timeless and having always been. We had come across too many aspects of As You Like It in rehearsals for our other pieces for us to ignore it

In what ways have you adapted and updated the text, did you find this a challenging process?

There is a framing device that contains the entire play. Our production starts with a young migrant in Calais learning English by reading Shakespeare. The play is experienced through his eyes. The songs are lip-synched. We have cut into the text and re-ordered it. The play ends differently. At first it was difficult to empower ourselves to take these liberties. Our company is comprised of nine actors – this alone limits how much of the play we can perform but then these kind of limitations are liberating; it means we have to change things. I think we are often uncomfortable about changing Shakespeare but that is a very British phenomenon – other nationalities wouldn’t think twice about a bit of adaptation. Once you have taken that step there is a lot of play to be had.

Does Transport’s physical, filmic style complement the text, how?

A lot of our work has been devised. I have always felt that the devising process relates well to working with Shakespeare, as the texts are so open. They can move in so many ways – there are so many choices. Contemporary performance styles feel close to the original making of those texts, as they are innately theatrical. I think we are always striving to find and celebrate the theatrical.

What’s the significance of transformation in this play? Is that something you see as a key theme in Transport’s work?

Much of our work has looked at what happens to our sense of self when we are taken out of our ‘home’ context. How do we define ourselves in an ever-shifting/changing world? Something that seems primarily a 21st Century dilemma is captured beautifully in this play. It is surprising. We are therefore connected to the present via the past and this is a rich experience.

You’ve described this adaptation as anarchic; do you think that is what Shakespeare originally intended?

I think there is an inherent anarchy and danger in Shakespeare’s plays, solely because of the spaces and audience/actor relationships that these plays were born out of. I always think Shakespeare wouldn’t mind. I think he might smile.

Tagged as Albany, as you like it, asylum seekers, bard, calais, Deptford, immigration, no borders, shakespeare, theatre, transport theatre