Drag up for Eurovision! 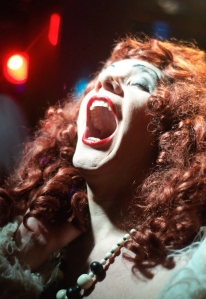 The highly-anticipated Grand Finale of the Eurovision Song Contest is upon us.  Since 1956, Eurovision has taken the continent by storm as the annual song contest held between European countries to find one stand-out song among the doozies. We’re particularly excited to be hosting our own live Eurovision Party screening complete with drag compere extraordinaire, Mrs Jonjo, this Saturday 10 May from 7:30pm. To prepare ourselves for this wild night of patriotism, camp and songs you are likely to forget the next morning, we bring you some random Eurovision Trivia:

Did you know that a drag queen is competing this year? That’s right, this year Austria’s contestant is the bearded queen Conchita Wurst, who is creating quite a stir with this song:

While this contestant may be unexpected to some, past acts have included some pretty zany things. Check out the Top Ten Weirdest Song Contest Entries Ever, including a Hard Rock Hallelujah and Estonian rock featuring a front man resembling Chewbacca from Star Wars:

While some songs are never heard of again, there are quite a few that have gone on to critical-acclaim and lasting success. Most notably, ABBA won for Sweden in 1974 with their smash hit ‘Waterloo’:

Lastly, to be fully prepared for Eurovision, it’d be best to have a listen to last year’s winner – Denmark’s Emmelie de Forest singing ‘Only Teardrops’:

We certainly hope this get you revved up to see who comes out on top this year! Remember to keep your fingers crossed for the UK and maybe those less fortunate countries that have yet to win (Portugal, Malta, Romania, Iceland, Hungary and Cyprus). Come out in your most fabulous drag or in your most patriotic colours for our Eurovision Party on Saturday 10 May at 7:30pm. For information and to book tickets (which include a drink voucher), please click here.