What is a London frost fayre? 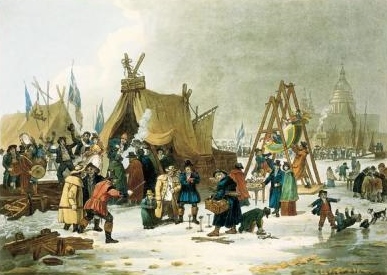 Between the 16th and 19th centuries Britain suffered what has been dubbed the ‘Little Ice Age’ by the storytellers and ‘a modest cooling of the Northern Hemisphere’ by the experts. This bout of cold was caused by volcanic eruptions across the globe and touched many countries throughout Europe, but particularly Britain. Old Jack Frost settled in hard when winter came around during those years. In London, a shallower and wider Thames combined with a fat, saggy Old London Bridge caused ice to form on the river easily. In fact, the Thames frequently froze over – up to several feet thick in some places! Imagine if that happened now! The whole city would stand still, dumbfounded.

In fact that’s pretty close to what happened. Today, it would most likely cause chaos, but back then it caused celebration. All along the Thames, from London Bridge to Westminster, festivals called ‘frost fayres’ sprung up on the thick ice, where people from all over the city came together to share in the joy and hilarity of a frozen River Thames.

Invented by the ferrymen of the river who suddenly found themselves out of business and in need of money (they charged a small fee for access to the ice – we however believe fun should be free for everyone!), these fayres featured a variety of entertainment, including music, dancing, football, ice-skating, bowling, archery, bull-baiting, shopping, eating, drinking, singing and even, if you’ll believe it, fairground rides! On the Thames! There were performances of all kinds, as the fantastical event spawned even more fantastic spectacles. The famous Chipperfield’s Circus, which is still running to this day, began with performing animals on the frozen river in 1684.

As for refreshments, there were BBQ’s, mini-pubs and stalls that sprang up all over the ice selling spiced ale, wine, toffee apples, hot chocolate and freshly baked gingerbread. The disused boat sails and oars were used as props for tents that sold toys and all kinds of crafts. A printing company called Croom created small postcards on the ice that included the customer’s name, the date of the frost fayre and the slogan ‘Printed on the Ice’.

The whole affair was such a novelty that winters in London were associated with the fun of the fayres long after the river stopped freezing. A poem dedicated to the celebrations (reprinted below) is engraved under the southern end of Southwark Bridge. Although the ice will never come back, that doesn’t mean we can’t have as much fun as the people of London during the frosts of the Little Ice Age. Come to Deptford Lounge on Saturday December 2nd, 11-4pm, for Deptford’s very own frost fayre inspired Frost Fest, featuring live music, singing, dancing, storytelling, hot chocolates, spiced wine, craft workshops and lots more frosty, festive activities.

Check back for how to enter our special Frost Fest Elephant Competition!

The Watermen for want of Rowing Boats

Make use of Booths to get their Pence & Groats

Here you may see beef roasted on the spit

And for your money you may taste a bit

There you may print your name, tho cannot write

Cause num’d with cold: tis done with great delight

And lay it by that ages yet to come

May see what things upon the ice were done

Frost Fest is on at Deptford Lounge on Saturday 2nd of December from 11am till 4pm. This is a free event.