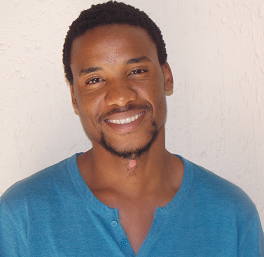 In 2008, in the  South African settlement called Skierlik, 17-year-old Johan Nel went on a racially motivated killing spree.  In response to this tragic event, award-winning playwright/actor Phillip M Dikotla wrote the play Skierlik, telling the story of Thomas, whose wife and baby were two of Nel’s victims, as he returns to the scene of the carnage. This undeniably powerful one-man show, starring Phillip, is here tonight and tomorrow (16 & 17 October, 7.45pm) as part of Afrovibes festival.  Ahead of the performances, he delves into why he chose this difficult subject matter and his creative process.

When I started working on this project, it was an unconscious process of creation, where I was driven by questions and/or curiosity, and the more I tried to find answers and understanding in relation to the Skierlik event, which at first struck a lot of fear in me, the story wrote itself.

Because I am a performer and have always wanted to ‘act’ – which to me meant having fun and telling stories and making people laugh – I had disregarded what I now refer to as a ‘voice’…my voice; what I want people to leave with after the show. As Skierlik grew, I would interrogate each and every experience, and realized that there is something I want to say, and the more I wrote the more I had to say.

The more I travel with my mind and engage my imagination, the more I understand what this story stands for, what it represents in this new South Africa today. And more importantly, it is told by a young person – me – who has no experience of being a father. All the characters in the play are older than me, and have experienced life more than me.

I have a wild imagination and at first only visited Skierlik in my mind; by the time I actually went to Skierlik, everything was as I experienced it in my imagination. I have never met Thomas, but through my little experience as a story teller I realize that a character is not what is written, but what the actor experiences in the presence of an audience. So in a nutshell, I don’t prepare for the character. As a story teller, you can’t be prepared for an experience like this one.